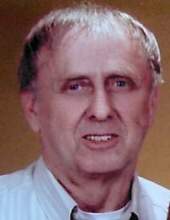 Funeral services will be held at 11:00 A.M., Saturday, April 8, 2017 at Immanuel Lutheran Church in Forest City, with Pastor Rod Hopp officiating. A flag folding presentation will be performed by the Leland V.F.W. Post # 6161.

Visitation will be held 5:00 – 7:00 P.M., Friday, April 7, 2017 at Cataldo Schott Funeral Chapel, 505 North Clark St. Forest City, IA and will also continue one hour prior to the services at the church on Saturday.

Burial of cremains will be held in Oakland Cemetery in Forest City at a later date.

In lieu of flowers, memorials may be directed to the Lynn E. Moklestad memorial fund in care of the family.

Lynn Edward Moklestad was born on a hot day, August 21st, 1948 in Forest City, IA, the son of Raymond and Viola (Rystad) Moklestad. He grew up on the farm with his older brother, Norris and younger sister, Margret. Growing up on the farm there was always cows to milk and chores to do. Lynn was baptized and confirmed at Immanuel Lutheran Church in Forest City. Lynn attended Ellington Township School for two years, then to Forest City Schools, graduating in 1966. Lynn attended NIACC for two years, studying tractor mechanics. He was drafted into the United States Army during the Vietnam War. He served on Vietnam soil and was honorably discharged for his service. After returning from his service he started farming on his family’s century farm.

Lynn met his wife Susan Lee from Gilbert, IA while she was attending Waldorf College; they later were married December 14, 1974 at Immanuel Lutheran Church in Story City, IA, to this union three sons were born, Erik, Chad and Greg.
Lynn loved the land and farming, it was a passion. He enjoyed raising livestock; he especially had a love of cattle. Lynn was always there to help a neighbor or friend that was in a time of need. He enjoyed sharing his love of farming with his sons and grandchildren. He also enjoyed hunting, fishing and traveling to see family. He was a life-time member of the Leland V.F.W. Post #6161. Lynn loved his family and friends and will be dearly missed by all who knew and loved him.

Lynn was preceded in death by his parents
To send flowers to the family in memory of Lynn Edward Moklestad, please visit our flower store.