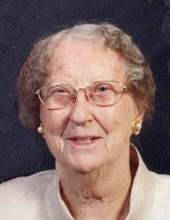 Funeral services will be held 10:30 A.M., Monday, October 30th at St. Wenceslaus Catholic Church in Duncan with Fr. Jim Dubert officiating. Burial will be in the church cemetery.

Visitation will be held from 3 to 5 P.M., Sunday at the Cataldo Funeral Chapel, 160 E. 4th St., in Garner with a Scriptural wake service at 2:30 P.M. followed by a combined CDA and Catholic Workman rosary. A VFW Auxiliary service will be held at 5 P.M. Visitation will resume one hour prior to services at the church.

Margaret Lila Zrostlik, the daughter of LeRoy and Margaret (King) Baker, was born February 11, 1924 at Waucoma, Iowa. She attended St. Mary’s Parochial School and graduated from Waucoma High School in 1942. Lila attended Upper Iowa University in Fayette and Drake University in Des Moines where she received a B.S. Degree in Education. She taught in rural schools in Chickasaw County, Marble Rock Consolidated School, Clear Lake Community Schools and Kanawha Community Schools. Lila met Paul Zrostlik while attending a dance at the Surf Ballroom in Clear Lake. On June 11, 1962 they were married at St. Mary’s Catholic Church in Waucoma. They made their home in Garner where they raised their four children. Lila also worked at the extension office in Garner and continued teaching as a substitute in the Garner-Hayfield Schools. She enjoyed quilting, baking, polka dancing, traveling and attending her grandchildren’s activities. Her great faith and gentle hardworking soul with a smile and quick wink will be missed by all.

She was a member of St. Wenceslaus Catholic Church in Duncan where she taught CCD classes and was active in bible studies. Lila also belonged to the Catholic Workman FCSLA w51, CDA Court Isabella 642 and the Garner VFW Auxiliary. She was also a Girl Scout, Boy Scout and 4-H leader.