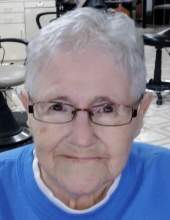 A gathering of friends and family will be held one hour prior to services at the funeral home on Sunday.

Burial of cremains will be held at a later date in Oakland Cemetery in Forest City.

Marilyn Faye Davis, Bannister, Adams lived a life filled with family. She was born June 23rd, 1936 to Albert and Edna (Hiller) Davis, she was one of 16 children. Marilyn, or better known to her family and close friends as Wimpy, attended school in Titonka, Perry and Algona. She was just one of the girls in the family that helped at the restaurants her parents had while growing up.

She continued throughout her adult life to work in food service and was very well known to just about everybody who came into the Bungalow in Forest City and continued with most all of them when the Bungalow closed and she was invited to work at The Sportsman's owned by her son, Randy and partner Cheryl Hansen until she retired. It was during that time of her life she married Red Adams.

Wimpy's love was her Family, Friends, Children, Grandchildren and Great Grandchildren. Fishing, being outside, watching and feeding the birds, watching westerns on TV, Old Country Music and reading. Her biggest and best story was regaling on how she was kissed by Marty Robbins!

She lost her husband, Red and moved into a small apartment in Forest City. Her health started to deteriorate after that and she was forced to leave her apartment and move into the Care Center in Lake Mills where she enjoyed watching the flowers and birds in good weather and Bingo when it wasn't.