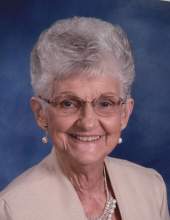 Funeral services will be held 10:30 A.M., Monday, April 23rd at Zion Evangelical and Reformed Church in Garner with Rev. Brian Lund officiating. Burial will be at Concord Township Cemetery.

Visitation will be held from 2 to 6 P.M., Sunday at the Cataldo Funeral Chapel, 160 E. 4th St., in Garner and will resume one hour prior to services at the church.

In lieu of flowers, memorials may be directed to the Marjorie Finn Memorial Fund.

Marjorie Ruth Finn, the daughter of Henry and Emma (Schultz) Greiman, was born July 9, 1927 on a farm southwest of Garner. She was baptized and confirmed at Peace Reformed Church. Marj attended the rural schools of Liberty Township and graduated from Garner High School in 1945. After high school, she moved to Omaha and attended business school. She worked at Mutual of Omaha and Federated Insurance Company in Omaha. On November 24, 1947 she was married to Harold R. Smallfoot in Omaha. They moved to Garner where they farmed and raised their six children. After her marriage to Harold ended, she married Clair Finn on June 8, 1973 at Zion United Church of Christ in Garner. They lived on a farm east of town. With this marriage, she gained seven stepchildren. Marj worked at Concord Manor, then at Mercy Hospital in the physical therapy department until her retirement in 1992. After Clair passed away in 1994, Marj continued to live on the farm until moving into Garner in 2006. She enjoyed her family, gardening, horseback riding, flowers, traveling and her church. She was commonly known as everybody’s mom and grandma.

She was a member of Zion Evangelical and Reformed Church in Garner, Zion Women’s Fellowship and Progressive Club.