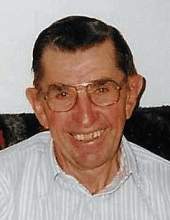 Funeral services will be held 2 P.M., Saturday, April 30th at Peace Reformed Church south of Garner with Rev. Mark Larson officiating. Burial will be in the church cemetery with military rites conducted by the Garner Veterans Ceremonial Unit.

Visitation will be held from 5 to 7 P.M., Friday at the Cataldo Funeral Chapel in Garner and will continue one hour prior to services at the church.

Memorials may be directed to the Liberty School Museum.

Merle Emil Klinge, the son of Fred and Ella (Schwartz) Klinge, was born on August 20, 1925 on a farm near Klemme, Iowa. He attended country school in Liberty Township and high school in Klemme through the tenth grade after which he left school to work on the family farm. In December of 1948 Merle was drafted into the Army and served with the 804th Aviation Engineer Battalion at Camp Gordon, Georgia as a heavy equipment operator. After serving one year, Merle was put into the reserve for five years and sent home. On August 12, 1950, Merle received orders to report back for active duty. After leaving Ft. Lewis, Washington, Merle was sent to Japan and joined the 3rd Infantry Division. From Japan, Merle was sent to Korea where he drove a jeep with a machine gun mounted on it. He was a driver for military personnel and many times carried high ranking military personnel into enemy territory. Upon his honorable discharge, Merle returned home in September of 1951 to the farm. Merle was married to Mary Dokken on August 19, 1962 at Elk Creek Lutheran Church in rural Kensett. They farmed west of Klemme until Merle retired in 1988. Merle and Mary built a home in Clear Lake and spent many happy years there. Merle enjoyed farming, gardening, fishing, traveling with Mary, playing cards, visiting with family and friends. He was a farmer at heart, a loving husband and uncle, a friend to many and he loved to share stories of his life growing up on the farm.

He was a member of the Peace Reformed Church, Garner, where he served in various leadership roles throughout his lifetime and the Garner VFW and American Legion.

He was preceded in death by his wife, Mary, his parents; a brother, Wayne Klinge; a sister, Esther Bertilson; brothers-in-law, Merle Bertilson, Leslie Dokken, James Dokken;and sister-in-law, Hazel Dokken.
To order memorial trees or send flowers to the family in memory of Merle E. Klinge, please visit our flower store.