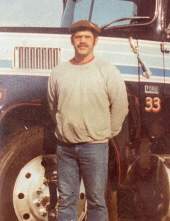 Due to state and federal guidance on gatherings, the family has requested that those wishing to express their sympathy drive in their cars to the east parking lot of the Garner-Hayfield Ventura High School from 4 to 5 P.M., Friday, April 10, 2020. Family and friends must remain in their cars with the windows closed. At 5 P.M. the family will be processing to Concord Township Cemetery in Garner for a private family graveside service with Rev. Scott Kozisek officiating.

In lieu of flowers, memorials may be directed in John’s name to MercyOne North Iowa Hospice.

Merle John Gouge, Jr., the son of Merle and Marion (Haag) Gouge, was born March 3, 1949 in Forest City. He attended school at Garner-Hayfield High School and Poly High in Long Beach, CA. At the age of 14, John began learning to drive truck with his uncle Dick Gouge running from Wisconsin to California. John continued in this vocation his entire life. Upon moving back to Garner, John was very proud to join his family working for Francis Zrostlik at Iowa Mold & Tooling where he performed a broad range of tasks. From there, John was a key element in helping his brother Pete get IMT Transport off the ground as a driver, mechanic or fabricator. John’s broad skill set was also valuable in Pete’s other business, American Eagle, which built weld positioners.
John’s skill and patience was known far and wide. He was thought of by many as a great teacher as he passed on his skills to anyone wanting to learn. He will be remembered for his patience and ability to teach all things from driving truck, machining, fabricating, or being a very good diesel mechanic. There was not much of anything John couldn't do or build with his hands. His workmanship was second to none and was always flawless in his execution of the task at hand.

On May 18, 1974, he was married to Violet Paulsen at St. Boniface Catholic Church in Garner. To this union, two daughters, were born, Hollie and Tuddie. John really enjoyed spending time with his family and riding motorcycles. He was especially proud of his 1937 Chevy that he has owned for nearly 50 years and has restored over the years.

He was preceded in death by his parents; and brothers-in-law, Duane Pigman and Timothy Wurtzel.
To order memorial trees or send flowers to the family in memory of Merle John Gouge, Jr., please visit our flower store.