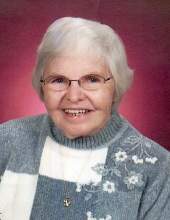 A memorial visitation will be held from 2 to 4 P.M., Sunday at the First Baptist Church in Forest City. Arrangements are being handled by Cataldo Schott Funeral Home, Forest City.

Muriel Jeanette Segerstrom was born in Red Wing, Minnesota on December 1, 1928 to Harry and Lydia (Saure) Peterson. She attended and graduated from Red Wing High School. On December 16, 1950 she married Robert (Bob) Segerstrom of Forest City, Iowa and she worked alongside her husband on the family dairy farm until they retired from farming in 1990. In her “retirement” she began working at the deli at Bill’s Family Foods in Forest City and she and Bob sold baked goods and garden produce at the Farmer’s Market in Forest City, Clear Lake and Mason City for many years.

Muriel had a strong faith and accepted Christ as her Lord and Savior at an early age and was an active member at Calvary Baptist Church for many years and was currently attending First Baptist Church.

Muriel was preceded in death by her parents; husband, Bob; daughter, Martha Gremillion; brothers, Roland and Elton “Bud” Peterson; and sisters, Eleanor Krantz and Dorothy Ruble.
To send flowers to the family in memory of Muriel J. Segerstrom, please visit our flower store.