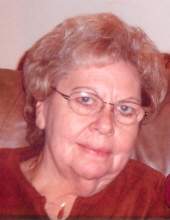 Burial will be held at Madison Township Cemetery in Forest City.

Myrna L. Oudekerk was born July 23, 1935 in Forest City, Iowa, the daughter of Frank and Hazel (Peters) Holcomb. She attended and graduated from Forest City High School. Myrna accepted the Lord in 1945 at the Calvary Baptist Church in Forest City. She was married to Ralph Oudekerk on June 19, 1954 and to this union, four children were born, Terry, Steven, Cindy and Chad. Her and Ralph farmed in the Crystal Lake area, Myrna worked at A & W Restaurant for 36 years and the Forest City Good Samaritan Center for 18 years.
Myrna loved to travel, especially her trips to Holland and Belgium. She also enjoyed the trips up north and road trips with her niece Connie. She also enjoyed having coffee with her friends and the many family gatherings through the years. She was a long-time member of the Calvary Baptist Church.

Her most enjoyment was her family, especially her grandchildren and great-grandchildren. Myrna will be dearly missed by all who knew and loved her.