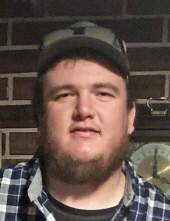 Funeral services will be held 10:30 a.m., Thursday, October 7, 2021 at St. Paul Lutheran Church in Garner with Rev. Scott Kozisek officiating.  The service will be livestreamed on the Cataldo Funeral Home Facebook page. Burial will be at Concord Township Cemetery.

Visitation will be from 3 to 7 p.m., Wednesday, October 6th at Cataldo Funeral Chapel, 160 E. 4th St., Garner and will resume one hour prior to services at the church.

Noah Michael Clites, the son of Daniel and Debra (Fank) Clites, was born June 14, 1996 in Blue Earth, MN.  He was baptized and confirmed at St. Paul Lutheran Church in Garner.  Noah attended and graduated from Garner-Hayfield-Ventura High School in 2014 where he was active in FFA and 4-H.  After high school, Noah worked at Zinpro in Garner for five years. He was currently working for Quayle Pumping.  Noah also worked on the farms for close friends Rick Prohaska, Jake Pringnitz, Dave Kapka, and Joe Schmidt, whenever needed.  Noah was blessed with a special talent for operating and fixing equipment, he always carried his pliers “farmer’s pistol” with him wherever he went in case something needed to be repaired.  He will always be remembered for working hard, seeking adventure, laughter, telling stories, and giving of his time and talent.  He enjoyed snowmobiling, farming, golfing, driving pickup trucks, and operating big equipment.  His friends nicknamed him "Farmer" even though he never lived on a farm.  Noah is continuing to help others through the gift of donation to Iowa Donor Network.

He was a member of St. Paul Lutheran Church where he was active in Jr. and Sr. LYC.

Noah is survived by his parents, Dan and Deb Clites of Garner; maternal grandparents, John and Sharon Fank; aunts and uncles, John Michael and Lori Fank, Jill and Doug Bryson, Greg and Anne Clites, Dave and Paula Clites, and Cathy and Dave Wylam; a bonus brother and best friend, Mitch Prohaska and his wife, Megan; cousins, Erica, Jay, Cara, Nikki, Brian, Ross, Brad, Joe, and Ben; and many other extended family and friends.