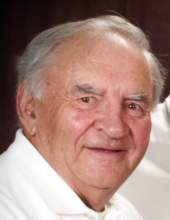 Funeral services will be held 10:30 A.M., Tuesday, February 16, 2016 at St. James Catholic Church in Forest City with Fr. Jim Dubert officiating. Burial will be in the church cemetery.

Visitation will be held from 4 to 7 P.M., Monday at the Cataldo Schott Funeral Chapel, 505 N. Clark St., in Forest City with a Scriptural Wake Service being held at 3:30 P.M.

Norbert Francis Machacek was born September 21, 1935 in Lonsdale, Minnesota the son of Frank and Josephine (Pumper) Machacek. He attended school at Immaculate Conception Catholic School in Lonsdale, MN and Bethlehem Academy in Faribault, Minnesota. He later earned his electrical degree and obtained his license. He served in the United States Army Reserves. He was married to Ann (Voracek) May 2, 1959 in Lonsdale, Minnesota. They moved to St Peter, MN where he was employed for ACE hardware as an electrician. They then moved to Forest City, IA where he worked for Winnebago Industries until he chose to leave and start his own electrical business. He was a member of St. James Catholic Church in Forest City

He enjoyed LIFE. He loved his wife, children and enjoyed being with his grandchildren. So much that he even took a chance on the trampoline. He enjoyed playing numerous card games with family and friends. He also did not miss many “daily” card games with his wife. He loved watching sports and the news. He could OFTEN be found doing research on his computer. He was never afraid of a “little” discussion. In his later days, he enjoyed working in his shed on many beautiful woodcrafts, always wanting to try something new. He could be found many a day outside splitting wood, “good” exercise he would say.

He was preceded in death by parents; sister and brothers-in-laws.
To order memorial trees or send flowers to the family in memory of Norbert Francis Machacek, please visit our flower store.