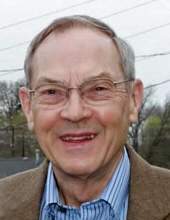 Funeral services will be held 10:30 A.M., Wednesday, January 13, 2021 at Redeemer Lutheran Church in Ventura with Rev. Jesse Burns officiating. Burial will be at Concord Township Cemetery in Garner with military rites by the Garner Veterans Ceremonial Unit. The service will be livestreamed on the Cataldo Funeral Home Facebook page beginning at 10:20 A.M. on Wednesday.

A visitation will be held from 5 to 7 P.M., Tuesday at Cataldo Funeral Chapel, 160 E. 4th St., Garner and will resume one hour prior to services at the church. Masks are required and social distancing guidelines will be followed.

In lieu of flowers, memorials may be directed to Redeemer Lutheran Church, the Humane Society of North Iowa or to the donor’s charity of choice.

Paul Keith Larson, the son of Benly and Petra (Rude) Larson, was born February 5, 1940 in Pelican Rapids, Minnesota. He was baptized at Pelican Valley Lutheran Church and confirmed at Trinity Lutheran Church in Pelican Rapids. Paul graduated from Pelican Rapids High School in 1958. In January of 1959, he enlisted in the U.S. Navy and was honorably discharged in December of 1963. Following his discharge, he attended Moorhead State College and Interstate Business College. On May 9, 1965 he was united in marriage to Evon Starman at First Congregational Church in Pelican Rapids. They lived in Crookston and Thief River Falls, MN and Fargo, ND before moving to Garner in 1977. Paul was employed at IMT in Garner for 30 years. He was an avid runner, completing 20 marathons and many half marathons and 10Ks. He served as race director for several years for the Duesey Days 10K and 2-Mile Race.

He was a member of Redeemer Lutheran Church and the Garner Rotary Club where he was a Paul Harris Fellow. He also served on the Board of Adjustments for the City of Garner and was active with the Garner Boys Scouts.

He was preceded in death by his parents; parents-in-law; infant, son, Thomas Paul Larson; a sister, Margaret Halbakken; brother-in-law, Marlow Halbakken; sister-in-law, Susan Larson; and a nephew, James Halbakken.
To send flowers to the family in memory of Paul K. Larson, please visit our flower store.