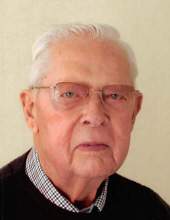 Memorial services will be held 10:30 A.M., Saturday, February 4th at First Baptist Church in Forest City with Rev. Robert Snitzer officiating. A flag presentation ceremony will be conducted by the Forest City Veterans Ceremonial Unit. Inurnment will be at a later date in Oakland Cemetery.

A memorial visitation will be held from 4 to 7 P.M., Friday at First Baptist Church in Forest City. Cataldo Schott Funeral Home is in charge of arrangements.

In lieu of flowers, memorials may be directed to Meals on Wheels in Forest City where Phillip volunteered for eighteen years.

Phillip Eugene Rasmussen, the son of Joseph and Anena (Carlsen) Rasmussen, was born October 27, 1928 at Lindsay, Nebraska. At an early age, he moved with his family to Scranton, Iowa where he graduated from high school in 1946. Phillip served his country in the U.S. Army from February of 1951 to February of 1953 and was stationed in West Germany. On March 20, 1955, he married Terry Lu Williams in Mason City. They farmed at Sheffield, Ogden and Madrid before moving to Leland in 1967. Phillip continued to farm near Leland until his retirement in 1993. In 1998, he and Terry moved into Forest City. Phillip enjoyed spending time with his family, traveling by train and was always looking to improve things whether it was on the farm or at home.

He was preceded in death by his parents; son, Eric, Aug. 10, 2013; sisters, Janet and Carol; and brothers, Calvin, David, Leo and Paul.
To order memorial trees or send flowers to the family in memory of Phillip E. Rasmussen, please visit our flower store.