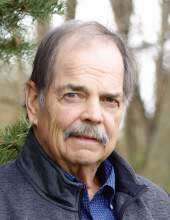 Randy L. Schleusner, 70, of Garner passed away Sunday, September 19, 2021 at his home with his family by his side.

A memorial mass will be held 10 a.m., Wednesday, September 22, 2021 at St. Boniface Catholic Church in Garner with Rev. Fr. Andrew Marr as celebrant.  Inurnment will be at St. Boniface Catholic Cemetery with military rites by the Garner Veterans Ceremonial Unit and the U.S. Army Honor Guard.  The service will be livestreamed on the Cataldo Funeral Home Facebook page.

Visitation will be held from 4 to 7 p.m., Tuesday, September 21st at St. Boniface Catholic Church and will resume one hour prior to services at the church.

Randy Lee Schleusner, the son of Louis “Bud” and Marge (Ptacek) Schleusner, was born April 29, 1951 at the Forest City Municipal Hospital.  He graduated from Garner-Hayfield High School in 1969 and enlisted in the U.S. Army.  On September 22, 1969 he received his orders to report to active duty on January 19, 1970.  Randy completed his basic training at Fort Lewis, Washington and then attended U.S. Army Signal School for communications training at Fort Monmouth, New Jersey.  After his training was completed in July 1970, he left for Vietnam in September 1970 and served there until February 1972.  Randy was honorably discharged as a Specialist Five and received from the Department of the Army the Army Commendation Medal on April 19, 1972.  He returned home after serving and began farming with his father.  On June 9, 1973 he married his high school sweet-heart Cindy Schulz at the United Methodist Church in Garner.  They made their home on the Schleusner Family Farm west of Garner until 2013 when they moved to town.   Farming, family, faith and serving his country were near and dear to his heart.

He was a member of St. Boniface Catholic Church and served on the church board.  Randy also served on the Hancock County Coop Oil board.  He was a lifetime member of the Garner VFW  Post 5515 serving as Senior Vice Commander.

He was preceded in death by his father, Bud Schleusner; and father-in-law, Donald Schulz.
To order memorial trees or send flowers to the family in memory of Randy L. Schleusner, please visit our flower store.