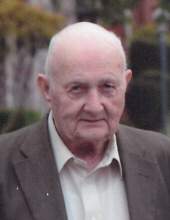 Funeral services will be held at 11:00 A.M. on Friday, April 26, 2019 at Calvary Baptist Church in Forest City with the Pastor Doug Farrell officiating. Burial will be in Brush Point Cemetery, rural Fertile, Iowa.

Visitation will be held on Friday, one hour prior to the services at the church.

Memorials may be directed to the Calvary Baptist Church.

Ray Lomax Sandifer Jr. was born January 2, 1930 in Crystal Springs, Mississippi, the son of Ray L. Sr. and Mildred (Paul) Sandifer. He served during the Korean War in the United States Army and was honorably discharged.

Ray was married to Dolores Jordan on October 20, 1953 at the Fertile Lutheran Church. He enjoyed the times he spent with his family and especially his grandchildren and great-grandchildren and will be missed by all who knew and loved him. Ray was a long-time member of the Calvary Baptist Church, where he served in many capacities.

Left to cherish his memory are his son, Rick Sandifer and wife Kathy of Nashua, granddaughters, Kelly Sandifer and Kristen (Stephen) Ryland of Lewisville, TX and three great-grandchildren, Claire, Calvin, and Elliot Ryland; brother-in-law, Raymond Jordan and wife Deanna of Northwood, and many nephews and nieces.

He is preceded in death by parents; wife, Dolores in 2016 and son, Gary Ray Sandifer.
To order memorial trees or send flowers to the family in memory of Ray L. Sandifer Jr., please visit our flower store.