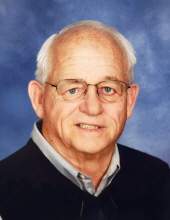 Visitation will be held one hour prior to services at the church. Face masks are required and social distancing guidelines will be followed.

Memorials may be directed to Zion Evangelical and Reformed Church or MercyOne North Iowa Hospice.

Raymond Henry Helps was born November 10, 1937 in Klemme. He was baptized and confirmed at the United Methodist Church in Klemme. He attended the rural schools of Avery Township in Hancock County and graduated from Klemme High School in 1958. Ray worked as a mechanic for Elmer Urich at International Harvester in Garner. On December 22, 1960 he married Esther Grace Eekhoff at Kanawha Christian Reformed Church. They farmed near Corwith until 1966 when they moved to a farm southeast of Klemme. In 2008, they retired and moved into Garner. During his retirement he worked as a hail adjuster. Ray enjoyed golfing, restoring cars and tractors, traveling and snowmobiling.

He was a member of Zion Evangelical and Reformed Church and past member of Immanuel Reformed United Church of Christ in Klemme where he served on the Sunday school board. He also served on the Hancock County Co-op Oil board.

Ray is survived by his wife, Esther of Garner; three children, Charles “Chuck” Helps of Clear Lake, Nancy (Steve) Jass of Garner and Tracy (Todd) Smeby of Klemme; four grandchildren, Chase and Trey Jass and Ashley and Brielle Smeby; a sister, Eunice (Lowell) Broer of New Providence, IA; and many nieces and nephews.

He was preceded in death by his parents; and brother and sister-in-law, Stanley and Sylvia Helps.
To order memorial trees or send flowers to the family in memory of Raymond H. Helps, please visit our flower store.