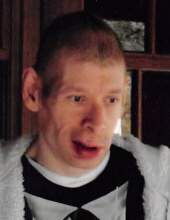 A graveside service will be held 10 A.M., Friday, October 20th at Crystal Township Cemetery in Crystal Lake with Rev. Dr. Glenn Wilson officiating. There will be no visitation.

Memorials may be directed to Exceptional Opportunities at P.O. Box 40, Algona, IA 50511 in memory of Robert.

Arrangements are with Cataldo Funeral Home of Woden.

Robert Dean Fischer, the son of Stoffer “Dusty” and Vivian (Wieth) Fischer, was born December 12, 1963 in Forest City. He lived with his family in Crystal Lake until 1974 when he moved to Exceptional Opportunities in Burt, Iowa. He attended school there graduating in 1985. Bob worked at different skills at Exceptional Opportunities. He enjoyed music and car rides going to the Dairy Queen and for treats.

Bob is survived by his five siblings, Pat (Roger) Wood of Woden, Jerry Fischer of Madrid, Deanna McCulloch of Forest City, Jeanette Mary of Joice and Tom (Diana) Fischer of Joice; a sister-in-law, Mary Wieth of New Mexico; and many nieces and nephews.

He was preceded in death by his parents; sister, Doris Potter; brothers, Jerry Wieth, George “Sonny” Fischer and Jeff “Fish” Fischer; and an infant sister.
To send flowers to the family in memory of Robert "Bob" D. Fischer, please visit our flower store.