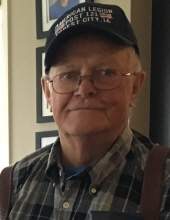 Burial will be held in Oakland Cemetery in Forest City with Military Honors performed by the Forest City American Legion Honor Guard.

In lieu of flowers, memorials may be directed to the Forest City American Legion or in his name in care of the family.

Robert Kay Rollefson was born February 19, 1939 in Forest City, Iowa, the son of Raymond G. and A. Meta (Rodemeyer) Rollefson. Bob enjoyed a very special relationship with his maternal grandmother Alma Riherd, spending a great deal of time with her during his youth. In 1953, as a 14 year old young man, he journeyed with her to the English sector of occupied Germany for a year where he learned to speak and write German while also witnessing first hand the ravages of World War II. The trip was very important to him. He attended and graduated from Forest City High School in 1957. He attended Waldorf College for 2 years, then continued his education at Mankato State College graduating with a Bachelor’s Degree in Business with a minor in History. He was the first member of his family to graduate from college with a 4 year degree. Bob was married to Phyllis Tannahill in 1962, they later divorced in 1991. He entered into the United States Army in 1964 and was later honorably discharged.

Bob worked for Winnebago Industries in the maintenance department, in his younger years, worked in the insurance industry, and operated the Fillus Inn together with his wife. In the 1970’s he entered into partnership with his good friend Norman Stromer selling stocks, bonds, and commodities as a registered representative for the RG Dickinson Company and then Okoboji Financial. As retirement beckoned he became a trusted driver throughout the United States for Winnebago dealer Lichtsinn RV of Forest City.

Bob loved playing any game of cards, playing cribbage, listening to country music, woodworking, hunting and collecting anything, especially coins. Bob had a love for animals.

He was proud to be a veteran and enjoyed being a part of the Honor Flight as an organizer and chaperone, and being an active member of the Forest City American Legion Post #121, serving as commander for many years.

He was preceded in death by his parents; sister, Dianne Clemmens and son, Robert A. Rollefson.
To send flowers to the family in memory of Robert "Bob" K. Rollefson, please visit our flower store.