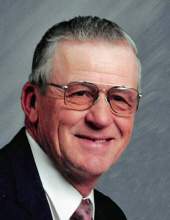 Funeral services will be held 2 P.M., Thursday, June 14th at First Presbyterian Church in Woden with Rev. Dr. Glenn Wilson and Pastor Diane Wilson officiating. Burial will be at Evergreen Cemetery near Wesley.

Visitation will be held from 4 to 7 P.M., Wednesday at the Cataldo Funeral Chapel, 310 Main St., in Woden and will continue one hour prior to services at the church.

Robert Duane Eden, the son of Edward W. and Anna (Dirksen) Eden, was born on June 12th, 1937 in Algona, Iowa. He attended Buffalo Township country school, Kossuth County, Iowa, and graduated from Titonka High School in 1954. Upon graduation, he worked the family farm with his father and continued to be active in farming with his son, Steven, right through the conclusion of spring planting just a few weeks ago. Farming was his life’s passion, growing corn, soybeans and raising hogs. It came naturally for him as his great-grandfather, emigrating from an area in northern Germany known as Ostfriesland, settled in the area and established farmsteads for each of his children; his mother also emigrated from the same area at the age of seven. With much pride he and Jackie compiled an Eden ancestry book in 2013 with over 900 direct descendants at that time. He was also a skilled carpenter and proficient mechanic. Robert enjoyed traveling and sightseeing.

On June 14, 1959, Robert married his wife of nearly 59 years Jacqueline Schlicht from Garner, Iowa at the Garner United Methodist Church. Together Robert and Jackie continued farming and achieved Iowa Century Farm status in 1996. He was a life-long member of the Woden Presbyterian Church and served as an elder.

Robert is survived and dearly remembered by his wife, Jackie; his son Steven (Anita) Eden of Wesley; his daughters, Julie (Steven) Burk and Beth (Steven) Forster both of Lakeville, Minnesota; five grandchildren: Eric and Jeneé Eden, Alyssa and Abigail Burk, and Andrew Forster; two sisters, Marian Spear and Elvina Garlock and many nieces and nephews.

Robert was preceded in passing from this life by his parents; a sister, Alice Franzen; and a special daughter of the heart, Tammy Sondergaard.
To order memorial trees or send flowers to the family in memory of Robert D. Eden, please visit our flower store.