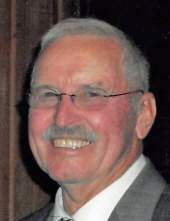 Due to COVID-19 the family has decided to wait until the month of May to have a memorial service which is scheduled for 10:30 A.M., Saturday, May 15, 2021 at Cataldo Funeral Chapel, 160 E. 4th St. in Garner. Inurnment will be held at Amsterdam Cemetery east of Goodell.

A memorial visitation will be held from 5 to 7 P.M., Friday, May 14, 2021 at Cataldo Funeral Chapel in Garner. Memorials may be given to the American Legion at Goodell, Iowa.

Roger Arthur Bachman was born March 23, 1938 to Clarence and Maude (Henry) Bachman in Mason City, Iowa. He was baptized at the United Methodist Church in Klemme, Iowa. Roger was raised on the family farm and graduated from Klemme High School in 1956. Following graduation, he enlisted in the United States Air Force, serving from 1956 to 1960. During that time, he served 18 months overseas in Okinawa, Japan. Returning back to the states, he was stationed at Little Rock, Arkansas until his honorable discharge in 1960. While in service, Roger married Patricia Porter on December 19, 1959, a marriage that blessed his life with five children, Mark, Todd, Joel, Kimberly, and Michael. They moved to the family farm in 1960 and started farming and raising livestock. Besides farming, Roger worked off the farm in construction and started employment with the Klemme Coop Elevator and retired from there after 24 years. During this time, his son, Mark, joined the farming operation. On September 8, 1990, Roger married Ruth Solomonson. They made their home in Forest City, Iowa. With this marriage he was blessed with two stepchildren, Michael and Debra.

Roger enjoyed watching sports, traveling, and dancing until his fight with cancer began. Roger will be remembered for his hard work, his smile, and his wit, which was a unique gift for perfectly placed humor. His great love and enjoyment were his family and friends.
Roger is survived by his wife, Ruth, of 30 years; his children, Mark (Kim) Bachman, Todd (Lynn) Bachman, Joel (Barbara) Bachman, Kimberly Bachman, and Michael Bachman; nine grandchildren, Jacob and CharLee Bachman, Darin, Cari Jane, and Jill Bachman, Steven and Rachel Bachman and her fiancé, Jamison Russell, Jessica and Daniel Jackson, Adam and Ryan Bachman; three great grandchildren, Bristol and Jessi Bachman and Aiden Jackson; two step-children, Michael (Laura) Solomonson and Debra (Rick) Acosta; two step-grandchildren, Craig and Justin Acosta; two sisters, Maxine Matherson and Darlene Reinig; and many nieces and nephews.

He was preceded in death by his parents, Clarence and Maude Bachman; an infant sister, Vivian; brother, Delbert Bachman; and brothers-in-law, Jim Reinig and Jim Matherson.
To send flowers to the family in memory of Roger A. Bachman, please visit our flower store.