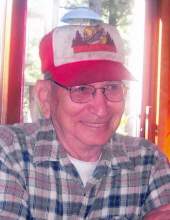 Memorial services will be held 1 P.M., Saturday, April 9th at the Cataldo Funeral Chapel in Garner with Rev. Jesse Burns of Redeemer Lutheran Church in Ventura officiating. Inurnment will be in Concord Township Cemetery in Garner.

Russell George Gross, the son of Leo and Beulah (Beaver) Gross, was born April 2, 1931 in Renesselaer, Indiana. He attended high school in Indiana and then moved with his family to northern Minnesota where he helped his father in the logging business. Russell returned to Indiana and worked for a company as a long distance trucker. On March 9, 1957 he married Rose Benson at Sioux Falls, SD. They lived in Fort Dodge, Garner and in 1990 moved to Aurora, MN. Russell was employed at Iowa Beef Pack in Fort Dodge and Winnebago Industries in Forest City until his retirement in 1990. He enjoyed fishing, gardening and, especially, spending time with his family.

He was preceded in death by his parents; and seven siblings.
To send flowers to the family in memory of Russell G. Gross, please visit our flower store.