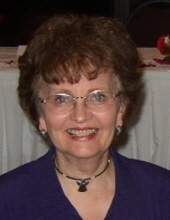 A Celebration of Life will be held on Tuesday, April 19, 2016 at 10:30 a.m. at Immanuel Lutheran Church in Forest City with Pastor Rod Hopp officiating. Burial of cremains will be held in Oakland Cemetery.

A gathering of friends and family will be held at Cataldo-Schott Funeral Chapel on Monday, April 18th from 5:00 – 7:00 P.M.

Ruth Joan (Hatteberg) Johnson was born in Radcliffe, IA on January 11, 1935, the daughter of Gerhard and Tobie (Prescott) Hatteberg. Ruth graduated from Radcliffe High School, Waldorf University, and received a BS in Business Administration from Mankato State University. She married Robert Johnson on July 5, 1959 at Immanuel Lutheran Church in Forest City. Their married life was the epitome of love and faithfulness to each other.

She served as Church Secretary/Parish Worker for St. Andrews Lutheran in Ames for three years from 1959-1962 while Bob attended ISU. After their move to Forest City, she worked in various capacities at Waldorf in the Development Office, Student Recruitment and Student Life. She also served as Secretary to the President at Waldorf University for many years. Ruth was the first person to hold the position of Director of Church Operations at Immanuel Lutheran Church in Forest City, and served in that capacity for several years before her retirement.

She was involved in many organizations including P.E.O. where she held several offices. She was an active member of the Hospice of North Iowa Board, serving as president for one year, a member in Immanuel’s Women of the Church and an alto in the Immanuel Choir for over 40 years.

Ruth’s passion was serving others. She demonstrated this in so many ways by being active in many aspects of the community. One particular area was helping those who were less advantaged. On one occasion she went so far as to give away the green family van to help one family in need, much to the dismay of her husband. She was in charge of the Hospice Salad Luncheon and Hospice Golf Tournament for many years. She and Bob sponsored several Waldorf Lutheran Leaders over the years. They would also invite Waldorf students over to their house as a home-away-from-home. She never went on a shopping trip without bringing back items intended specifically for others. She spent a great deal of time assisting refugee families getting settled into the community, answering business questions, and offering advice and counsel when language was a barrier. She loved organizing coffee parties or picnics for newcomers to the Waldorf family.

She enjoyed flower gardening and spending time outdoors, decorating, visiting friends and family, traveling and shopping for sales. She came from a large family that was very important to her. She was concerned about the welfare of each one. Her ultimate joy and delight was found in her children and especially her grandchildren. She enjoyed years of concerts, sporting events, musicals and plays where they were involved.