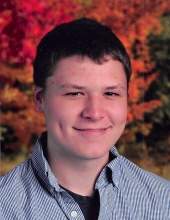 Funeral services will be held 10 A.M., Saturday, August 11th at the Garner-Hayfield-Ventura High School Auditorium with Rev. Paul Evans officiating. Following the service, his body will be cremated. A graveside service will be held 1 P.M., Sunday, August 12th at St. John’s Catholic Cemetery in Duncan.

Visitation will be held from 4 to 8 P.M., Friday at the United Methodist Church in Garner and will resume one hour prior to services at the high school.

Memorials may be directed to the Ryan M. Sanner Memorial Fund.

Ryan Michael Sanner, the son of Joel Sanner and Michelle (Burnett) Chizek, was born September 12, 2001 in Wichita, Kansas. He was baptized at the United Methodist Church in Garner. Ryan lived with his family on a farm northwest of Garner and was going to be a junior this year at Garner-Hayfield-Ventura High School. In high school he was active in the Garner FFA. Ryan helped his step-father, Tom, on the family farm doing cattle chores, baling hay and picking rock. He enjoyed visiting his father, Joel, in Kansas, archery, hunting turkey and deer, 4-wheeling, listening to the rock group KISS, fishing with his friends and spending time with his sister, Jenna.

He was preceded in death by his grandparents; and an uncle, Neal Sanner.
To order memorial trees or send flowers to the family in memory of Ryan M. Sanner, please visit our flower store.