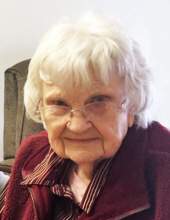 A memorial service will be held 1:30 P.M., Saturday, August 22, 2020 at the Cataldo Funeral Chapel, 160 E. 4th St., Garner with Mark Schoneman officiating. Private inurnment will be at Pleasant View Cemetery in Thornton.

Visitation will be held one hour prior to services at the funeral chapel. Masks are encouraged and social distancing guidelines will be observed.

Selma Gladys Schoneman, the daughter of Sever and Gunhild (Haugen) Stensrud, was born on July 16, 1922 in Lake Mills, IA. Gladys was one of twelve children, and they all grew up on a small farmstead in Lake Mills. In 1939, she graduated from Lake Mills High School and then moved to the Mason City area where she worked at the Mason City Municipal airport during the duration of WWII with her sister, Anne. Gladys operated telecommunications equipment for the Airport, and even learned how to pilot small aircraft. After the war, Gladys met Roger Schoneman - a navy veteran - and they were united in marriage in 1947. For several years, they lived in Emmons, MN where they had four children - Nancy, Mark, Dianne and Paul. As their children grew, they decided to move to Clear Lake, IA in 1963, where all their children eventually graduated high school. Gladys absolutely adored being a mother and raising her children, always being supportive of them and never going to bed at night until they were all home safe and sound. Gladys was a swift typist with excellent math skills, and in 1967, she was hired as the Clear Lake City Clerk and she held the position for nearly 20 years until she retired in 1986. Gladys loved to spend time with her family, and her face would always light up when a child or grandchild walked in the door. Proud of her Norwegian heritage, she was capable of speaking Norwegian, and she would often recite prayers at family gatherings in the language. Occasionally, Gladys and her sister Vicky would speak Norwegian to each other in front of their husbands, Roger and Manny, to tease them - always resulting in lots of laughter and many “uff-da’s!” Gladys lived at her Clear Lake home for 53 years until she moved to Cardinal Grove in Garner at age 94 in 2016. Even in the twilight of her life, she could still go toe-to-toe with anyone in her favorite games: Cribbage, 500, Bridge and Checkers. Gladys will always be remembered for her kind and caring personality, intelligence, great sense of humor, extreme work ethic and a humble attitude. She was a longtime member of Zion Lutheran Church in Clear Lake and a devout believer in Jesus Christ, with her favorite bible verse being John 3:16.