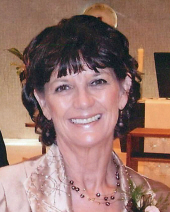 Visitation will be held from 3 to 7 P.M., Sunday at the Cataldo Funeral Chapel, 160 E. 4th St., Garner with a Rosary Society rosary at 3 P.M. Visitation will continue one hour prior to services at the church.

Memorials may be directed to the Sandra Welsh Memorial Fund.

Sandra Lee Welsh, the daughter of John and Dorothy (Jencks) Kretchmer, was born August 9, 1949 at Huron, South Dakota. She graduated from Bancroft High School in 1967 and continued her education at Huron College in South Dakota. On April 20, 1968 she was married to David Welsh at Iroquois, SD. They lived on the family farm near Bancroft for several years. Career transfers moved them to different locations before settling in Garner in 1977. Sandy was very active raising their children, as well as operating a day care out of her home. She enjoyed spending time with her family, gardening, baking, sewing and reading. She found greatest joy spending time with her grandchildren. She will be sadly missed by her family and friends.

She was preceded in death by her mother, Dorothy; and sister Donna Zell.

To order memorial trees or send flowers to the family in memory of Sandra L. Welsh, please visit our flower store.