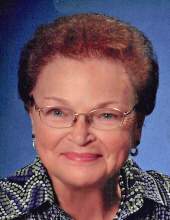 Private family graveside services will be held Thursday, March 26, 2020 at Otis Grove Cemetery near Dows with Rev. Scott Kozisek of St. Paul Lutheran Church officiating. There will be no visitation.

Memorials may be directed to St. Paul Lutheran Church, Garner.

Sonja Bertilson, was born February 23, 1932 to Hanni Emrich in Saarbrucken, Germany. She came to the United States with her mother in 1948 at the age of 16 years. She learned English by briefly attending 5th grade in Britt, Iowa and always remembered the kindness shown to her there. She married 1st Lt. Carl Franzen near Garner, Iowa on July 19, 1953. After studying for her citizenship, she became a United States citizen on October 8, 1959. During that time, she made many lifelong German friends while studying together. Carl and Sonja lived in Klemme and had two daughters together, Carolyn and Mona. After his death in 1968, she married Merle Bertilson February 14, 1970 and together they had a daughter, Lori. They, and their blended family including Merle’s children, Mary Jo, Dennis, Carol and Dean, lived on a farm near Klemme until 1987 when they retired and moved into town. Sonja loved spending time with her family and friends, riding behind Merle on his motorcycle, spending time in Florida every year, taking care of their many flowers with Merle, listening to German music and crocheting blankets for her family. She especially loved caring for Merle and was his primary care giver during his last illness. She spent the last few years residing at Concord Care Center, a place she once worked at as a young widow. She was very happy and well cared for there. Sonja was a member of St. Paul Lutheran Church.

She was preceded in death by her mother, her husband Carl in 1968, her husband Merle in 2013 a step-son, Douglas Bertilson, a granddaughter, Amanda Jolyn Erdahl and special friends, Henry and Betty Bode.
To order memorial trees or send flowers to the family in memory of Sonja Bertilson, please visit our flower store.