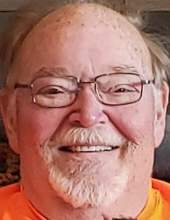 Funeral services will be held 10:30 A.M., Monday, April 19, 2021 at Cataldo Funeral Chapel, 160 E. 4th St. in Garner.  The service will be livestreamed on the Cataldo Funeral Home Facebook page.

Visitation will be held from 4:00 to 6:00 P.M., Sunday at Cataldo Funeral Chapel.  Masks are recommended.

Theodore “Ted” Arthur Salz Sr. was born on August 25, 1956 to Arthur and Betty (Vikturek) Salz in Osage, IA. He was raised in Manly and Mason City with his sister, Debbie. Ted had a passion for life that inspired everyone around him. When he met the love of his life, Laura Gouge, roller skating he put all that passion into her and their life together. They were married on October 13, 1979 in Garner and welcomed Theodore JR and Samantha into their lives. After living in Mason City and Iowa Falls, they settled in Garner to raise their family. Ted enjoyed hunting with family friends near Geneva, Iowa, figure 8 racing (and to be honest any kind of racing) with his son, watching his daughter take in every stray or sick animal she came across, and watching his grandchildren play and grow. He was an avid camper and for the last 15 years had a permanent spot that he called their "summer home" in Forest City. He instilled a deep love of family in his children, and they are passing it on.

Ted worked primarily as a plumber for most of his professional life, and he and Lori were foster parents to a few very special children for a few years too. Coming closer to retirement, he started driving truck over the road as a team with Lori for DOT Foods, spending every moment he could with her. When they were home, they were surrounded by family and friends.

He was preceded in death by his parents, Arthur and Betty Salz; and parents-in-law, Merle and Marian Gouge.
To order memorial trees or send flowers to the family in memory of Ted A. Salz, Sr., please visit our flower store.