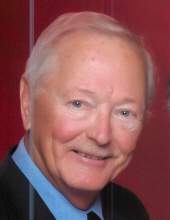 Tom was born on August 17, 1940 in Forest City, IA. The youngest son of Herbert and Ona Nessa. Tom had 5 siblings, Pauline, Bob, Sally, Mary and Gloria. Tom attended Forest City schools and graduated in 1959. After graduation, he joined the Marine Corps and was always very proud to be a Marine. He was discharged in San Diego in 1963 and stayed in California and went to work on the Apollo Space Program at Rocketdyne, Space Division in Van Nuys, CA.

Several years later he was employed by Control Components Int. an engineering and Mfg. company in Irvine, CA where he stayed for over 30 years retiring in 2001. Tom was an avid Golfer and was lucky enough to have had 2 holes-in-one over the years. In the course of his employment Tom traveled extensively and was always delighted to play on some exceptional courses around the world.

Tom met his wife Patricia in California and married in 1964. They lived their entire adult life in Southern California and Las Vegas, and happily retired in Forest City in 2007. Tom and Pat recently celebrated their 53rd wedding anniversary.

Tom is survived by his wife, Pat, his daughter Sherry (Jeff) Mercier of Kingman, AZ. Also survived by his grandson Thomas Strawn of Colorado Springs, CO., four granddaughters; Brittany (Mark) Hardy, of Menifee, CA.; Tara Strawn of Las Vegas, NV.; Tristian Hall of Las Vegas, NV., Augenet Horner of Medford, OR. He is also survived by two great grandchildren, Alexis (8) and Noah (2). Tom’s grandchildren were the light of his life and traveled as often as possible to spend time with them. Tom is also survived by the only sibling in his Mother’s family, his Aunt Nelda Prelip of Kanawha, IA. He is also survived by eight nieces and six nephews as well as many great nieces and nephews. Lastly he leaves behind his beloved dogs, Missy and Teddy.

Memorial Services will be held at 2:00 P.M. on August 26, 2017 at Immanual Lutheran Church in Forest City with Pastor Rod Hopp officiating. A Celebration of Life will be held immediately following at Bear Creek Golf Club in Forest City.

In lieu of flowers, donations may be made to Hospice of North Iowa; Forest City Education Foundation; and Winnebago County Relay for Life.

“Tom always followed his dreams, never the rules”
To order memorial trees or send flowers to the family in memory of Thomas Franklin Nessa, please visit our flower store.