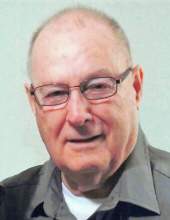 The funeral service for Willis has been canceled at First Lutheran Church in Britt. A graveside service will be held 10:30 A.M., Thursday, March 19, 2020 at Memorial Park Cemetery in Mason City. Willis’ family understands in this unknown time with the COVID-19 pandemic that attending his visitation at the funeral home may not be in your best interest. Please be with us in prayer. Should you wish to attend the visitation, friends may call at Cataldo Funeral Home, 178 First Ave., S.W., in Britt on Wednesday from 5 to 7 P.M.

Willis Robert Wood, the son of Willis and Francis (Orr) Wood, was born November 16, 1933 at Falls City, NE. He graduated from Mason City High School in 1952 and continued his education at Mason City Junior College, now NIACC. Willis served his country in the U.S. Army during the Korean Conflict from 1952 to 1954 and continued his service in the Army Reserves until 1962. In 1953, he married Dixie Wessels at the Little Brown Church in Nashua. They lived in Germany until returning to Iowa settling in Stilson. In 1970, they moved to Corwith where they raised their family. Willis was employed with the Iowa Department of Transportation for 42 years retiring in December of 1998. In 2007, he and Dixie moved to the Summit House in Britt. After Dixie passed away in 2010, he continued to live at the Summit House. On June 16, 2013 he married Jane Tegtmeyer Hilton at First Lutheran Church in Britt. They made their home at the Summit House. He enjoyed reading, painting working Sudoku and putting jigsaw puzzles together.

He was a member of First Lutheran Church in Britt, Masonic Lodge, and belonged to a Book Club.

He was preceded in death by his parents; first wife, Dixie; granddaughter, Trisha Wood; brother, Ronald Wood; and brother-in-law, John Tegtmeyer.
To order memorial trees or send flowers to the family in memory of Willis R. Wood, please visit our flower store.