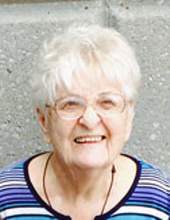 Visitation will be held from 5 to 7 P.M., Monday at the Cataldo Funeral Chapel, 160 E. 4th St., in Garner and will resume one hour prior to services at the church. Cataldo Funeral Home of Garner is in charge of arrangements.

Agnes Marie Kozisek, the daughter of James and Emma (Bina) Skluzacek, was born March 22, 1928 in Lawton, ND. She attended the rural schools near her home until the ninth grade. Her mother passed away when she was sixteen and Agnes then stayed home to help raise her two younger siblings. On June 14, 1949, she was married to Laddie R. Kozisek in Brocket, ND. They lived on her family farm in North Dakota where they farmed until moving to Kensett, Iowa in 1967. They lived in Kensett for eight months and then moved to Garner. Agnes cleaned several homes and businesses in the Garner area for years, retiring at age 80. She worked extremely hard and gave of herself her entire life. She enjoyed volunteering at Opportunity Village in Clear Lake. Agnes had a passion for gardening, plants and flowers. She was an active member of Ventura Garden Club. Agnes' grandchildren claim many of their fondest childhood memories are of the many adventures that took place with their cousins while at grandma's farm. She was a kind, loving and humble woman whose memory will be forever cherished.

She was preceded in death by her parents; husband, Laddie, Dec. 27, 1999; two grandchildren, Anna and Anthony Kozisek; a brother, Floyd Skluzacek; and a brother-in-law, Walter Freese.
To send flowers to the family in memory of Agnes M. Kozisek, please visit our flower store.