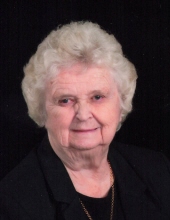 Funeral services will be held 10:30 a.m., Wednesday, October 6, 2021 at Zion Evangelical and Reformed Church in Garner with Rev. Brian Lund officiating.  Burial will be at Concord Township Cemetery.

Visitation will be held one hour prior to services at the church on Wednesday.  Cataldo Funeral Home is in charge of arrangements.

In lieu of flowers, memorials may be directed to Hope Ministries in Des Moines.

Alberta Jean Kalkwarf, the daughter of Jelto and Margaret (Pals) Dirksen, was born July 25, 1934 on a farm east of Alexander in Franklin County.  She graduated from Alexander High School in 1951.  During high school she was active in band and basketball.  Alberta was Alexander’s  Band Festival Queen in 1951.  She continued her education at Mason City Junior College.  On August 23, 1952 she was married to Loren Kalkwarf at First Reformed Church in Meservey. They made their home on a farm northeast of Belmond.  To this union three children were added: Charlotte, LuAnn and Mike.  Alberta worked at Tomco Seed in Belmond, assisted Loren on the farm and stayed busy raising her family.  She played piano at various church activities, was a 4-H leader and was very involved in her families many activities.  Alberta and Loren enjoyed taking family vacations, square dancing and camping.  They retired from farming in 1977 and moved to Garner.  In their retirement they kept busy collecting clothing from businesses and individuals and would drive them to Hope Ministries in Des Moines where the clothing was distributed to needy people.  Alberta and Loren attended all their grandchildren and great grandchildren’s activities until they were unable to physically attend them all.  Alberta enjoyed cooking, scrapbooking and watching basketball.

She was a member of Zion Evangelical and Reformed Church and Zion Women’s Fellowship.

She was preceded in death by her parents; two brothers, Gary and Donovan Dirksen; and a great granddaughter, Sydney Muff.
To order memorial trees or send flowers to the family in memory of Alberta J. Kalkwarf, please visit our flower store.
Send a Sympathy Card