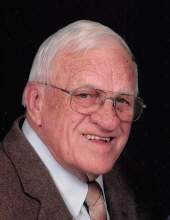 Visitation will be held from 5 to 7 P.M., Wednesday at the Cataldo Funeral Chapel, 160 E. 4th St., in Garner and will resume one hour prior to services at the church.

Memorials may be directed to the Garner Edwin Jante VFW Post 5515.

Alfred Theodore Voss, Jr., the son of Alfred and Rose (Wendt) Voss, was born August 19, 1928 at Bennett, Iowa. He graduated from Tipton High School in 1946. Al served his country in the U.S Army Air Corps from 1946 to 1949 in a rescue squadron in Bermuda. Following his honorable discharge, he returned to Iowa and received his bachelor’s degree from Iowa State Teacher’s College and later his master’s degree from Drake University to become a school guidance counselor. In 1950, he married Melva Romp and to this union five children were born. They later divorced. Al was a school superintendent in several districts in Iowa including, Murray, Central City, and YJB (Yale, Jamaica and Bagley). He was also a math and science teacher, in addition to a driver's education instructor. In 1973, he retired and moved to Garner where he began working for Perfect School Plan doing fund raising for school groups by selling magazine subscriptions. He also taught driver’s education in Klemme and Garner for a few years. On January 8, 1983 he married Agnes Ziehlsdorf Watson at the Little Brown Church in Nashua. They lived in Garner all of their married life. He enjoyed crosswords, golfing, and wintering in Texas and Florida.

He was a member of St. Paul Lutheran Church, Garner Lions Club, Garner Edwin Jante VFW Post 5515 where he served as past state commander and was chair of the County Veterans Affairs Commission.

He was preceded in death by his parents; son-in-law, Steve Smith; sisters, Leora, Vivian and Darlene; and brother, Lester.
To send flowers to the family in memory of Alfred "Al" T. Voss, Jr., please visit our flower store.