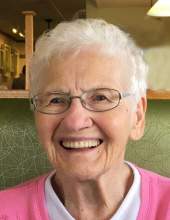 Visitation will be held from 4 to 6 p.m., Sunday, September 19, 2021 at Cataldo Funeral Chapel, 160 E. 4th St., Garner with a rosary at 3:45 p.m. and a Scriptural wake service at 6 p.m.   Visitation will resume one hour prior to services at the church. Masks are highly recommended.

Memorials may be directed to St. Wenceslaus Catholic Church in Duncan or MercyOne North Iowa Hospice.

The service will be livestreamed on the Cataldo Funeral Home Facebook page.

Alice Jeanette Malek, the daughter of Henry and Alta (Steenhard) Ahlfs, was born July19, 1926 on a farm near Woden in Hancock County.  She attended country schools through eighth grade and graduated from Buffalo Center High School in 1943. Alice married Clement Malek on September 24, 1946 at Holy Family Catholic Church in Mason City. They farmed north of Duncan until they retired and moved to Garner in August of 2001. In October of 2019, Alice moved to Apple Valley Assisted Living in Clear Lake. She was a member of St. Wenceslaus Catholic Church in Duncan, Catholic Slovak Ladies Association, and the Duncan Rosary Society.  Alice enjoyed reading, walking and crocheting.  She made afghans for all her children, grandchildren and many of her great grandchildren.  Alice made the best caramel rolls and enjoyed having her children come on Saturday morning for coffee and rolls and a good visit.

She was preceded in death by her parents; husband, Clement in 2002; an infant daughter; daughter-in-law, Laurie Malek; three grandchildren; a great grandchild; a great-great-grandchild; and her sisters, Anna Tjarks and Erma Gettis.
To order memorial trees or send flowers to the family in memory of Alice J. Malek, please visit our flower store.