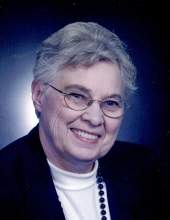 Funeral services will be held 10:30 A.M., Wednesday, January 16, 2019 at the United Methodist Church in Garner with Rev. Paul Evans officiating. Burial will be at Concord Township Cemetery in Garner.

Alice Jean Potter, the daughter of Sander and Nettie (Hanna) Stenersen, was born September 27, 1931 near Woden. She attended country school near Woden and graduated from Lake Mills High School. After high school, she worked at Decker’s in Mason City in the food service department. On January 1, 1955 she was married to Galen E. Potter at the Little Brown Church in Nashua. They farmed near Buffalo Center, Forest City and Crystal Lake until their retirement. Alice also worked at Westview Care Center in Britt and Bill’s Family of Foods in Garner. After Galen passed away in 1997, she moved to Garner. The past two years, she was a resident of Prairie View Apartments in Garner. In her retirement, Alice volunteered at Concord Care Center. She enjoyed quilting, crocheting, needle point, sewing, bowling, gardening and watching Jeopardy.

She was a member of the United Methodist Church in Garner and UMW.