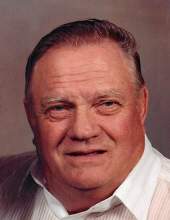 Memorial services will be held 2 P.M., Wednesday, December 31st at the Cataldo Schott Funeral Home in Forest City with James Mantel, lay minister at Our Saviors Lutheran Church in Leland, officiating. Military rites will be conducted by the Leland Veterans Ceremonial Unit.

Visitation will be held from 5 to 7 P.M., Tuesday at the Cataldo Schott Funeral Home in Forest City and will continue one hour prior to services at the funeral home.

Allen L. Brown, the youngest child of Emery and Hannah (Anderson) Brown, was born August 20, 1932 in Mt. Valley Township, Winnebago County. He grew up in the Forest City area where he attended school. Allen served his country in the U.S. Army during the Korean War as a tank mechanic. Following his honorable discharge, he returned to Forest City. On October 12, 1956 he married Clarice Jordahl at Buffalo Center. They lived their entire married life in Leland where they raised their three children, Michael, Susan and Tom. Allen owned and operated a service station and bulk plant in Leland for a time and worked at Winnebago Industries delivering truck toppers. He also was co-owner of CR’s Crafts in Leland with his wife, Clarice. He enjoyed traveling, gardening, spending time with his family and sharing candy with his grandchildren. Allen was known in the area for growing fantastic sweet corn.

He was a member of Our Saviors Lutheran Church and the Leland VFW Post No. 6161.

Allen is survived by his wife of 58 years, Clarice; three children and their families, Michael (Joanne) Brown of Forest City and their two children, Travis and Tiffany Brown, Susan Krein of Leland and her three children, Adam (Shanee) Krein, Marissa Krein and Jonathan Krein (fiancée, Quincey Vaagensmith), and Tom (Kyra) Brown of Hillsboro, OR and their four children, Hannah Brown, Jarod Brown, Daphne Morgan and Tristan Morgan; two great grandchildren, Logan and Colby Krein; and many nieces and nephews.