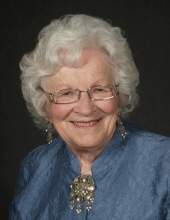 Funeral services will be held 10:30 A.M., Monday, January 21, 2019 at Faith Lutheran Church in Miller with Rose Visser, lay minister, officiating. Burial will be at Concord Township Cemetery in Garner.

Visitation will be held from 4 to 7 P.M., Sunday at the Cataldo Funeral Chapel, 160 E. 4th St., in Garner and will resume one hour prior to services at the church.

Memorials may be directed to Faith Lutheran Church in Miller.

Alma Johanna Olson, daughter of Theodore and Malenda Rogness, was born April 13, 1921, on the family farm near Forest City. She attended Ellington Center School in Hancock County and graduated from Forest City High School in 1939. Alma grew up in a traditional Norwegian home learning English when she started country school. Her love of Norwegian traditions and food was lifelong. She grew up on a farm learning the love of family, faith in God, and the nurturing of plants and animals. After graduation, Alma and her sister, Thelma started working in the Glenn L. Martin Bomber plant in Omaha, Nebraska to support the war effort. On November 28, 1943, she was married to Arno M. Olson at Miller Lutheran Church. Arno and Alma’s marriage of 69 years was blessed with five children; Billy, Karen, Janet, Sandra and Barbara. As a farm wife, she enjoyed helping with chores, driving tractors, and taking a truckload of grain to the local elevators for Arno. Alma loved working in her garden growing food and flowers. She was involved and served various leadership positions in Altar Guild, 4-H Clubs, Federated Garden Club, Birthday Club, Church Group (WELCA) and Ellington Prairie Couple's Club. Sewing clothes for her family and making handcrafted needlework brought joy to her life. Alma and Arno danced many nights at the Surf Ballroom to big band music and polka bands. Alma was a member at Faith Lutheran Church in Miller.