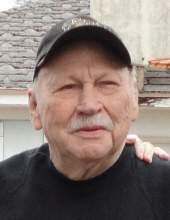 Al worked hard all his life as a printing press operator. He worked at the Forest City Summit for many years and then in Mankato until his retirement in 2011.
A lifelong car enthusiast, Al would only drive a Chevy or a Jeep. He also enjoyed golfing and regular trips to the casino with Kay.

Al is survived by his wife, Kay, of 34 years, three step-children: Jim (Vonnie) Johns of Cedar Rapids, IA; Carla Stitt of Mason City, IA; and Janell (Dan) Twait of Forest City, IA; seven grandchildren and 15 great-grandchildren. He is also survived by his sister-in-law, Bev Wedeking, two nieces and their families and his aunts, Harriet Thoren, Cora Maupin and Rosie Holecek.

Al was preceded in death by his parents, his brother-in-law Tom Wedeking and several aunts and uncles.

According to Al’s wishes there will be a private family graveside service.
To order memorial trees or send flowers to the family in memory of Alvin "Al" Miller, please visit our flower store.