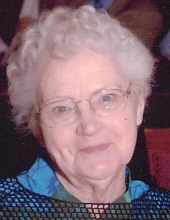 Private family funeral services will be held at the Cataldo Funeral Chapel in Garner with Pastor Fred Jones officiating. Burial will be at Concord Township Cemetery in Garner.

Amy Louise Jump, the daughter of Alex and Jessica (Sawyer) Kazemba, was born January 19, 1928 in Jackson, MN. At an early age, she moved with her family to Clear Lake, WI where she graduated from high school in 1946. On June 14, 1947 she was united in marriage to Floyd Jump at St. Paul, MN. They lived in many communities throughout Iowa and Minnesota eventually settling in Waterloo where they resided for many years. In 1983, they retired and moved to Harrison, AR and in 2005 to Garner. Amy enjoyed playing the piano, crocheting, gardening, painting pictures, writing poems and volunteering at nursing homes where she shared her musical talents.

She was preceded in death by her parents; daughter, Susan Van Ootegham; grandson, Michael Stevens; and three brothers, Dean, Forest and Felix Kazemba.
To order memorial trees or send flowers to the family in memory of Amy L. Jump, please visit our flower store.
Send a Sympathy Card