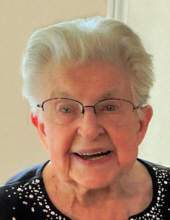 Ann Marie Haes, the daughter of Adam and Marie (Stang) Schmidt, was born March 21, 1924, at Fort Dodge. She graduated from Garner High School in 1941. On February 21, 1944, she was married to Don Haes at St. Boniface Catholic Church in Garner. They farmed together west of Garner where they raised their three children, Dick, Bill and Nancy. Ann and Don enjoyed spending their winters in Texas and Arizona.

To order memorial trees or send flowers to the family in memory of Ann M. Haes, please visit our flower store.