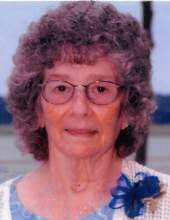 Funeral services will be held 10:30 A.M., Monday, March 6th at St. Boniface Catholic Church in Garner with Fr. Jim Dubert officiating. Burial will be in the church cemetery.

Visitation will be held from 3 to 5 P.M., Sunday at the Cataldo Funeral Chapel, 160 E. 4th St., in Garner with a Scriptural wake service at 2:30 PM followed by a rosary.

In lieu of flowers memorials may be directed to the Anna Lou Wille Memorial Fund.

Anna Lou C. Wille, the daughter of Henry and Anna (Marchand) DeWeerdt, was born May 18, 1927 on a farm south of Duncan. She attended the rural schools near Duncan until 1939 when she moved with her family to a farm southeast of Garner. Anna graduated from Ventura High School in 1944. On July 18, 1950, she was married to Glenn Wille at St. Boniface Catholic Church in Garner. They lived in Mason City for one year until Glenn was called to serve his country in the U.S. Army. During this time, Anna Lou moved in with her parents. After his honorable discharge, they moved onto the DeWeerdt family farm where they farmed and raised their family. In 2004, Anna Lou and Glenn moved into Garner. Besides helping on the farm, Anna Lou also worked as a secretary in the Hancock County Nurses Office until her retirement. Anna Lou and Glenn hosted many foreign exchange students in their home over the years. They also frequently entertained at their farm hosting family reunions, BBQ’s and celebrations for both family and friends. Anna Lou was the mint maker for every family event. She enjoyed her family, crafts, gardening and collecting bells, thimbles and coffee cups.

She was a member of St. Boniface Catholic Church where she served on the parish council. She was also a member of the ODO Club. When her children were growing up Anna was active in 4-H serving twelve years as a club leader and over forty years as a garden leader. She was inducted into the 4-H Hall of Fame at the Iowa State Fair in 2006. She also received the Governor’s Volunteer Award and in 1979 was recognized as an Iowa Master Homemaker. She was an influential part of bringing Relay for Life to Hancock County and continued working for Relay until her health failed.

She was preceded in death by her parents.
To order memorial trees or send flowers to the family in memory of Anna Lou C. Wille, please visit our flower store.