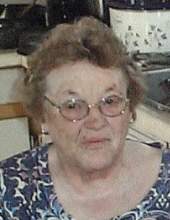 Memorial services will be held 1:30 P.M., Thursday, April 5th at the Cataldo Funeral Chapel in Garner with Rev. Scott Kozisek officiating. Inurnment will be at a later date in Amsterdam Cemetery in Goodell.

Visitation will be held one hour prior to services at the chapel.

Anna Mae Pannhoff, the daughter of George and Grace (Lamfers) Schoolcraft, was born June 25, 1937 at Renwick, Iowa. At an early age she moved with her family to Forest City where she attended school. On November 5, 1957 she was married to Richard “Dick” Pannhoff in Garner. They lived in Garner where Anna Mae worked at a local restaurant.

She was a member of St. Paul Lutheran Church in Garner.

She was preceded in death by her parents; husband, Dick, Nov. 7, 1985; and a brother, Jim Schoolcraft.
To send flowers to the family in memory of Anna Mae Pannhoff, please visit our flower store.