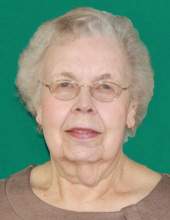 Funeral services will be held 10:30 A.M., Monday, January 20, 2020 at the United Presbyterian Church in Garner with Rev. Justin Asche officiating. Burial will be at Concord Township Cemetery.

Visitation will be held from 4 to 6 P.M., Sunday at the Cataldo Funeral Chapel, 160 E. 4th St., Garner and will resume one hour prior to services at the church.

Memorials may be directed to the United Presbyterian Church or Garner Volunteer Ambulance Service.

Ardean Gustafva Rasmussen, the daughter of Oscar and Gaylena (Hunt) Monson, was born July 4, 1926 in Marshalltown. At an early age, she moved with her family to Wesley where she graduated from high school in 1945. For a short time, she was a receptionist at Park Inn Hotel in Mason City. She met Curtis Rasmussen at the Surf Ballroom in Clear Lake. They later married on August 31, 1947 at the Little Brown Church in Nashua. They lived and farmed on the Rasmussen family farm north of Garner and raised their family. In 1977, they moved into Garner. Ardean and Curtis enjoyed golfing, traveling in their motor home throughout the United States including Alaska and wintering in California. Ardean enjoyed her family, playing cards and going to workshop at her church.

She was a member of the United Presbyterian Church where she taught Sunday school, UPW, Homemakers Club and the North Garner Community Club. In her younger years, she was a 4-H leader and a home economics judge for the Hancock County Fair.

She was preceded in death by her parents; husband, Curtis, July 15, 1999; two sisters, D’Loras Price and Charlotte Hopes; and great grandson, Owen James Lamb.
To order memorial trees or send flowers to the family in memory of Ardean G. Rasmussen, please visit our flower store.