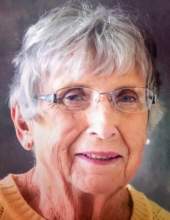 Visitation will be held from 4 to 6 P.M., Monday at Cataldo Funeral Chapel, 160 E. 4th St., Garner and will resume one hour prior to services at the church.

Arlene Augusta Jass, the daughter of George and Edna (Hoeft) Knopf, was born December 23, 1936 at Fort Dodge.  She attended St. John’s Parochial School east of Garner until the fifth grade and graduated from Ventura High School in 1955.  On February 14, 1958 she was united in marriage to Gary Jass at St. Paul’s Lutheran Church in Garner.  They lived in Mason City, Hampton, Iowa Falls and Ventura for 20 years before moving to Garner in 2005.  Arlene was employed at Northwestern Bell Telephone, Mason City Community Schools and Curtis Printing Company for 18 years.  She enjoyed golfing, fishing at Sand Lake in Minnesota and reading. She was a member of St. Paul Lutheran Church and past member of Redeemer Lutheran Church in Ventura where she was active in LWML, choir and the Altar Guild.

She was preceded in death by her parents; husband, Gary, Apr. 20, 2014; son, Randy Jass in 1989; and grandson, Jason Mennen.
To send flowers to the family in memory of Arlene A. Jass, please visit our flower store.