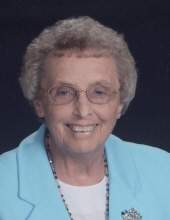 Funeral services will be held 10:30 A.M., Saturday, August 12th at St. Boniface Catholic Church in Garner. Burial will be in the church cemetery.

Visitation will be held from 5 to 7 P.M., Friday at St. Boniface Catholic Church with a rosary at 4:30 P.M., followed by a Scriptural wake service.

Memorials may be directed to St. Boniface Catholic Church or Meals on Wheels. Arrangements are with Cataldo Funeral Home in Garner.

Arlene Lois Schmidt, the daughter of Henry and Amanda (Helm) Riekena, was born September 3, 1931, at Woden. She grew up in Forest City where she graduated from high school in 1949. Following high school, she worked at Harrison’s Department Store in Forest City. On September 5, 1953, she was married to George Schmidt at St. James Catholic Church in Forest City. They lived in El Paso, Texas where George was stationed in the U.S. Air Force. Following his discharge in 1955, they moved back to Iowa and settled on a farm northwest of Garner where they raised their family. Besides helping on the farm, Arlene also volunteered her time in the Garner community at Concord Care Center and delivering Meals on Wheels for thirty-two years. She enjoyed spending time with her family, walleye fishing at Lake Kabetogama, MN, visiting with people, singing in the church choir and going to church.

She was a member of St. Boniface Catholic Church where she sang in the choir.

She was preceded in death by her parents; an infant brother and sister, LeRoy and Donna; and a brother, Vernon.
To order memorial trees or send flowers to the family in memory of Arlene L. Schmidt, please visit our flower store.