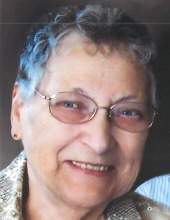 Memorials may be directed to the Good Samaritan Center in Forest City and the Arlene M. Gambell memorial fund in care of the family.

Arlene married Richard Dean Gambell on April 15 1953; to this union 3 children were born Arthur, David, and Linda. Arlene helped her husband Dean on the family farm until his retirement in 1985. She enjoyed the time she spent with her children and grandchildren. She enjoyed going to garage sales looking for deals, going to the casino and cooking.

She was preceded in death by her parents; her husband, Dean; her children, Arthur, David, and Linda, and her brother, Eldon Klipping.
To order memorial trees or send flowers to the family in memory of Arlene M. Gambell, please visit our flower store.