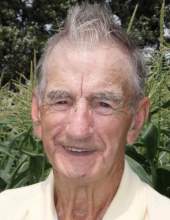 Funeral Services will be held at 10:30 A.M. on Wednesday, August 1, 2018, at the Fertile Lutheran Church with the Pastor Dave Halvorson officiating.

Interment will be held in Brush Point Cemetery in rural Fertile.

Memorials may be directed to the Fertile Lutheran Church.

Arnold Lester Hauge was born April 26, 1924, in rural Thompson, Iowa, the son of Carl and Bertina (Hougland) Hauge. He attended Leland High School, graduating in 1941.
Arnold met Helen Mae Keyser in 1945 and they were married at West Prairie Church in Leland, IA in January of 1946. To this union five children were born; Dennis Arnold, Paulette Kay, Kent, Paul and Craig.

During their married years they lived and farmed in the Thompson/Leland area from 1946-1954. The following year they moved to Bancroft where Arnold and Helen worked for Welp’s Hatchery. Later they moved to Forest City where Arnold worked at Fryer Farms. In 1966 they purchased their acreage near Fertile. Arnold worked for Kayout Forester, various farmers, Winnebago Industries and Mobility RV.

Arnold lived a life that made a difference to and touched many people. He coached softball in Fertile for many years because he didn’t think it was right that only the boys had teams. He found pride and had passion for raising horses for approximately 40 years.

He loved his family with his whole heart and very seldom missed an event that his children or grandchildren were in. The best times were spent in his front yard watching the kids play ball on a Sunday afternoon. He was one of their biggest fans.

He was preceded in death by his parents; wife, Helen; sons, Dennis, Craig, Kent; daughter, Paulette; and grandson, Matthew.

He will be greatly missed by his family and many friends.
To order memorial trees or send flowers to the family in memory of Arnold Lester Hauge, please visit our flower store.