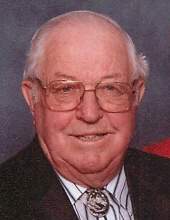 Visitation will be held one hour prior to the service at the church on Friday.

Memorials may be directed to Hospice of North Iowa or the Immanuel Lutheran Church in Arnie’s name.

Arnold Murra was born in Buffalo Center, Iowa to Dick and Mary Murra, he lived most of his life in Forest City.

Raised on a farm outside of Buffalo Center, Arnie grew up accustomed to hard work, a trait that he kept all his life. He started his career at Hanson Implement in Forest City during the late 40’s. He later became the co-owner of M&N Motors in Forest City where he sold cars and farm machinery until he sold the business in the mid 60’s. Although he spent a good deal of time working in the implement and car business, Arnie’s real passion was auctioneering a trade which he learned on his own. He continued in the auction business full time until well into his 70’s acquiring the moniker of Col. Arnie, a title of which he was extremely proud.

After retiring, he loved to travel, especially to see his children and growing number of grandchildren and to spend the cold Iowa winters in places like Arizona and Florida. He also enjoyed playing cards and shooting the breeze with many good friends in his retirement, especially his best friend and neighbor (and partner in crime) Tom Bowen.

Arnie is preceded in death by his parents, Dick and Mary Murra; brothers, Clarence, John, Bill, Dick and Richard and sisters, Helen Hovey and Cornelia Staggs.

Arnie is survived by his wife of 69 years, Burnette Qualley Murra of Lake Mills; his three sisters, Arlene Thorland of Mason City, Marian Farrow of Buffalo Center and Grace Jurgens of Buffalo Center and his three children and their families, Linda Murra Janssen (Van), Sharon Murra Harder (Rollin) and Wayne Murra (Damaris).
Grandpa “Arnie” was the proud grandfather to Brandon Harder, Christopher Janssen, Courtney Janssen East, Brita Murra, Zachary Murra and Lucas Murra. He also considered himself so fortunate to have known and loved 8 great grandchildren as well as numerous nieces and nephews.
To send flowers to the family in memory of Arnold Murra, please visit our flower store.