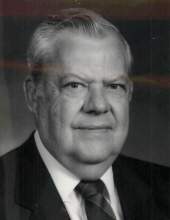 A gathering of friends and family will be held from 5:00 – 7:00 P.M. Friday, September 18, 2015 at Cataldo Schott Funeral Chapel in Forest City and also one hour prior to services at the church on Saturday.

Inurnment will be held in Oakland Cemetery in Forest City.

Memorials may be directed to the Good Samaritan Center of Forest City, Forest City United Methodist Church or the donor’s choice.

A native of Iowa City, Benjamin Franklin Carter Jr. was born May 17, 1919, to Benjamin and Elizabeth Carter. He graduated from Iowa City High School in 1936 and the University of Iowa. Carter earned his private pilot’s license while a student at the university in 1947. He enlisted as an aviation cadet in the Navy Air Corps in 1942 and received his wings and commission in 1943. After 17 months sea duty with a Navy patrol bomber squadron, he returned to the states and was an instructor and later executive officer of a Navy air base in Florida.

Carter married Joyce Ann Bridges on January 3, 1945 in Highland Park, IL. After his discharge from the Navy in 1946, Ben and Joyce moved to Detroit, MI where Ben was advertising manager for the Detroit Suburban Newspapers. September 15, 1947, Ben became advertising manager of the Forest City Summit, owned by Harold and Ernest Cassill. Fourteen months later the Cassills decided to sell and the Carters bought the newspaper.

Carter was editor-publisher of The Summit for 37 years, retiring in 1983. During his tenure, The Summit won a long list of awards in the “Better Newspaper Contests” sponsored by the Iowa Press Association, including four times being named as the top community weekly newspaper in Iowa.

He is survived by his wife, Joyce; two sons, Benjamin III (Jan) of Georgetown, TX; and Robert (Yvonne) of Brooklyn Park, MN; a daughter, Cynthia of Forest City; five grandchildren, Jason (Amber) of College Station, TX; Joshua (Stephanie) of Metrairie, LA; Haille of League City, TX; Ashley (Nathan) Burress of Eldridge, IA and Anthony (his fiancé Yelena) of Forest City; four great-grandchildren, Isabel, Maxwell, Jackson and Benjamin Carter; and a brother, Robert of North Richland Hills, TX.
He was preceded in death by his parents, a sister, Louise, and a brother, Richard.
To send flowers to the family in memory of Benjamin F. Carter Jr., please visit our flower store.