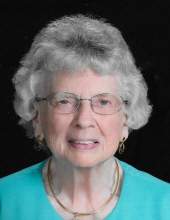 Bernadine “Bernie” Hawe, 94, of Garner, passed away Saturday, February 23, 2019 at Concord Care Center in Garner, surrounded by her loving husband and children.

Visitation will be held from 4 to 7 P.M., Wednesday at St. Boniface Catholic Church with a Scriptural wake service at 3:30 P.M. followed by a rosary.

Bernadine Hawe was born October 7, 1924 in Belmond, Iowa to William and Anastasia (Gaffney) Barry. On February 18, 1946 she married her high school sweetheart, Louie Hawe, and they began their new life on the farm in Dows. Later they purchased a farm near Hayfield where they enjoyed farm life for many years until retiring and moving to their new condominium on the Garner Golf Course. Bernie was a devoted spouse, mother, daughter, sister and friend. She volunteered at St. Boniface Catholic Church in Garner, was a member of the Homemaker’s Club, enjoyed playing cards with friends and taking care of her family. Bernie felt education was very important and took great pride that all four of her children pursued degrees after graduation from high school.

Bernie enjoyed traveling with Louie, taking family trips every summer and later spending their winters in Arizona. A favorite trip was to Ireland to see the birthplace of her mother and attend a family wedding in Cavan, Ireland. They also celebrated a very memorable 25th anniversary with a trip to Hawaii. While spending winters in Arizona she learned china painting and created many beautiful items to gift to her family and friends. Ballroom dancing was a favorite activity for Louie and Bernie, with the Surf Ballroom in Clear Lake being one of their “first dates”. In Arizona their park model was conveniently right across from the ballroom and considered a prime spot for activity.

Bernie was preceded in death by her parents; brothers, George, Vince and Jim; a sister, Anne Hammar; and a nephew, James Hammar.
To order memorial trees or send flowers to the family in memory of Bernadine Hawe, please visit our flower store.