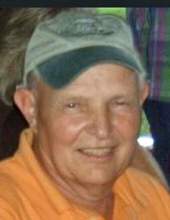 Due to state and federal guidance on gatherings due to the COVID-19 pandemic, a private family memorial mass will be held at St. Boniface Catholic Church in Garner with Fr. Paul Lippstock officiating The service will be live streamed on the Cataldo Funeral Home Facebook page 10:00 A.M., Tuesday, April 21, 2020. Private family Inurnment will be at Concord Township Cemetery.

A drive by memorial visitation will be held from 4:00 to 5:30 P.M., Monday, April 20, 2020 at the Garner-Hayfield-Ventura High School east parking lot and will be live streamed on the funeral home Facebook page.

In lieu of flowers, memorials may be directed to the Bernie Nedved Memorial Fund in care of Cataldo Funeral Home, 760 Center Ave., Garner, IA 50438.

Bernard Vincent Nedved, the son of Vincent and Agnes (Hrubes) Nedved, was born August 16, 1944 in Garner. He grew up on the family farm south of Hayfield and attended Garfield Township No. 5 country school. Bernie graduated from Garner-Hayfield High School in 1962 and farmed near Hayfield. On June 26, 1971 he married Suzan Kay Bell at St. Theresa’s Catholic Church in Des Moines. They lived on a farm north of Hayfield until 1977 when they moved to their home on Sesame Street in Garner. Besides farming, Bernie also was employed as a school custodian at the high school and enjoyed working construction for many years with Gerald Pedersen. He enjoyed his family, his grandchildren, gardening, drives around Clear Lake with Sue, and visiting with friends at Casey’s General Store. Bernie also was an avid Iowa Hawkeye fan.

He was a member of St. Boniface Catholic Church, Catholic Workman FCSLA Branch w51 and was a past member of the Garner Lions Club.

He was preceded in death by his parents; parents-in-law, William and Donna Bell; brothers-in-law, Dean Weiland and Richard Smith; and niece, Melanie Mitchell.
To send flowers to the family in memory of Bernard "Bernie" V. Nedved, please visit our flower store.