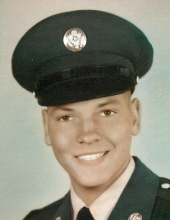 Funeral services will be held 10:30 A.M., Thursday, March 12th at St. Wenceslaus Church in Duncan with Fr. Dennis Miller officiating. Cremation will follow the service with burial of the urn at a later date in St. John’s Catholic Cemetery in Duncan. Military rites will be conducted by the Garner Veterans Ceremonial Unit.

Memorials may be directed to the Bernard Zrostlik Memorial Fund.

Bernard Leo Zrostlik, the son of Joseph and Marie (Malek) Zrostlik, was born March 31, 1945 in Britt. He attended Britt High School graduating in 1963. Bernie served his country in the U.S. Army during Vietnam. Following his honorable discharge, he moved to Martinez, California. Bernie worked at Shell Oil Refinery as a superintendent for logistics until his retirement in 1995. He then began his own moving company, BZ Hauls, in Benicia, CA. In 2006, Bernie moved to Garner. He enjoyed fishing, duck hunting, and was an avid 49ers fan. He also enjoyed watching NASCAR plus many other sports as well as listening to country music.

He was a member of Catholic Workman FCSLA 51 for over fifty years.